Alternate picking should follow the same rhythm rules as strumming eighth notes. Check out that lesson for more info but the gist of it is you downstroke on the beat and upstroke on the offbeat.

The two symbols used to represent an upstroke is an up arrow on a rhythm sheet or the V symbol. If either of the symbols aren't present on your music sheet then it's ultimately your choice how to pick. Following the subdivision rule of a downstroke on the beat and an upstroke on the offbeat will be a great rule of thumb to follow.﻿

Here's what the V symbol looks like on Tab or Standard Notation.

Picking each open string is a good way to focus on your picking without having to worry about what your fret hand is doing. This example shows alternate picking on the low fours strings of the guitar. Note how the beat has the downstroke and the offbeat had the upstroke. Just like the downstroke picking﻿ exercises you should work on dampening or muting your open strings as you transition off of one and move to another.

A Minor Pentatonic Exercise (Up)

To begin alternate picking with a scale, practice by picking each scale note twice. One note is a downstroke and the other is an upstroke. This will get your fret hand and your picking hand working together before you jump into alternate every scale note change.

A Minor Pentatonic Exercise (Down)

This exercise is the same concept but you are moving musically down the scale.

At this point you are ready to alternate pick every note switch. You will be surprised how tricky this sample can be when starting with alternate picking. Make sure your pick hand doesn't cheat by doing two down or upstrokes in a row. Watch your picking hand and verify it is alternating. When you are comfortable with the minor pentatonic scale and alternate picking. Move on to the major scales. Those are harder because they generally have 3 notes per string instead of 2.

﻿Below is the scale diagram of the A minor pentatonic if you prefer to read scales this way over the tab way.  Always use a metronome and make sure (by watching your picking hand) that every stroke is alternating. 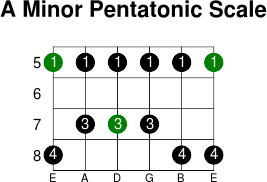