Tablature is a form of music notation that is specific to guitar.  Tablature is often referred to as "tab" and can also be used with other stringed instruments like the bass, mandolin, banjo, etc.  Tab lines represents the strings of the guitar.  The numbers on each line/string tell the player which fret to play on that string.  Tablature is quite easy to read once you get used to it and can get you playing songs and riffs much faster than music written on standard notation.﻿ 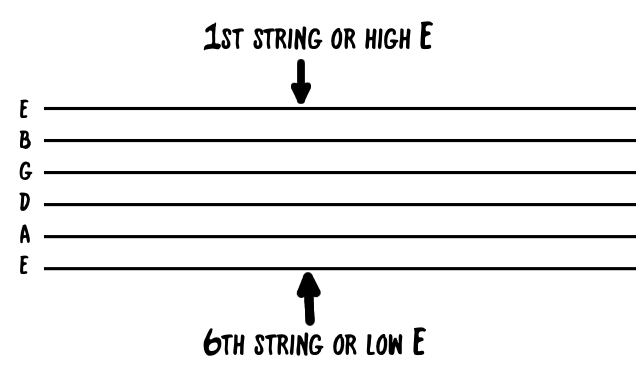 Numbers on the Tablature Staff

Now that you know that the horizontal lines of the tab staff are your guitar strings, the next thing you need to know are what the numbers on those lines represent.  These numbers simply refer to the fret on that string.  If there is a 0 on the string line, that simply means you play that string open and un-fretted.﻿  Tablature really is just a grid of your fretboard laid out horizontally.  Don't get the lines of the tablature staff confused with the lines of a standard music staff.  They represent two completely different things.

Tablature is unique to stringed instruments like the guitar.  As such, this form of music notation can quickly get you playing music by simply finding the indicated note on the indicated string and picking it.  This makes tab quick and easy to learn.

Sometimes, there's more than one way to play a song on the guitar﻿.  Tablature can tell you exactly the right place to play on the fretboard.  With standard music notation you have to decide where the best place to play the notes are.

The biggest and most detrimental drawback to tablature is the lack of rhythms on the notation.  Tab shows you what and where to play something, but it doesn't tell you how long to play it for.  Standard music notation does tell you this information and that's one reason it is more difficult to learn than tablature.  To correctly play rhythms from tab you need to know how the song goes and utilize your ear to often play things right.

Playing chords written on tab can also be challenging.  Many notes/numbers stacked on top of each other﻿ tell you the chord to play but it can be difficult to pick that up in realtime.  Granted this same problem also exists on standard music notation as well.  One way tab can overcome this is to annotate the chord name or diagram above the tab staff.  More on this in a later tab music notation lesson.

The Best of Both Worlds

You'll often see a standard music staff combined with a tab staff.  This combines the best of both worlds by giving you the ease of use of reading tab with the rhythmic values outlines on the standard staff.﻿  This sample is the Peter Gunn theme by Henry Mancini.  You can see that all of the notes are played on the low E string and the music staff shows the rhythmic values are all straight 8th notes.  You've most likely heard this little theme before though so you could probably pick this up even if the standard staff info wasn't available.  As a guitarist, you should become familiar with both styles of music notation and be able to play one or the other.