﻿Sharps in music are notated with a pound symbol (#).  This means you should raise the note a half step up.  So if you sharp a D, you would write a pound symbol in front of it and you would end up playing a D# which is 1/2 step higher than a D.

Below is an example of sharped notes on the Treble Clef staff.  The first note is D# followed by G#.

﻿Flats are the opposite of sharps.  Flats lower the note value by a half step.  The symbol for a flat looks kind of like a bold lower case 'b'. If I flat a D, I would lower it 1/2 pitch to play Db.  Db, D, D# are three unique pitches and are not the same note.

The example below shows a Db and a Gb on the Bass Clef.

The key signature uses flats and sharps to designate the key of the song.  Music keys are part of music theory and this lesson won't go into each key.  Check out the lesson on the circle of 5th's to understand keys better.  After the clef symbol you should look for sharps and flats.  If you don't see any sharps and flats there, that means you are playing in the key of C which doesn't contain any sharped or flatted notes in its scale.  If you do see a sharp or flat, then whatever note that accidental is placed on you need to sharp or flat those notes throughout the entire song.  So if you have one sharp of F in the key signature, you need to play all F#'s throughout the entire song.

Below is what the key of C key signature looks like.  Note that you don't see anything (ie. sharps or flats)﻿ 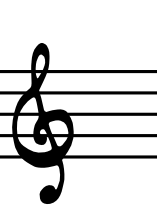 If the key signature of the song is a key that uses sharps, then you will see the pound symbols directly after the clef symbol.  This example below is the Key of D with 2 sharps. 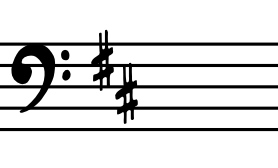 If the key signature of the song is a key that uses flats, then you will see the flat symbols directly after the clef symbol.  This example below is the Key of Eb with 2 flats. 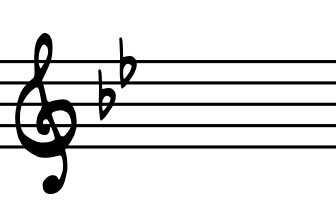